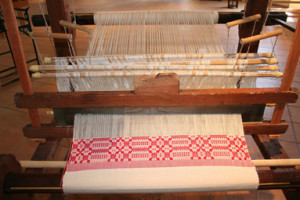 As a costume historian, I jumped at the chance to review this book, especially since the nuns I knew while attending Catholic school were so unlike the women portrayed in this fascinating study.

The custom of Renaissance and Baroque Venice was for families to make a spectacular marriage for one daughter and lavish a huge dowry on her to raise their standing in the eyes of the city’s rich and powerful leaders. All other daughters were relegated to convents, even if they had no religious vocation. Young women who had dreamed of being wives and mothers found themselves locked behind tall stone walls and closely held under the control of the church.

The well-researched study gives us insight into how dress and accessories played a part in brightening the lives of the hundreds of these reluctant cloistered nuns, and also acted as reminders to the people around them that these women were ladies of rank. The grille screens that separated them from not just the populace of that great city, but their families, allowed these women a modicum of independence and the ability to make decisions that they never would have been permitted in the worldly life from which they had been torn.

This book, filled with unexpected gems, make it a fabulous, informative and entertaining read. Recommended highly.

This website uses cookies to improve your experience while you navigate through the website. Out of these cookies, the cookies that are categorized as necessary are stored on your browser as they are essential for the working of basic functionalities of the website. We also use third-party cookies that help us analyze and understand how you use this website. These cookies will be stored in your browser only with your consent. You also have the option to opt-out of these cookies. But opting out of some of these cookies may have an effect on your browsing experience.
Necessary Sempre abilitato
Necessary cookies are absolutely essential for the website to function properly. This category only includes cookies that ensures basic functionalities and security features of the website. These cookies do not store any personal information.
Non-necessary
Any cookies that may not be particularly necessary for the website to function and is used specifically to collect user personal data via analytics, ads, other embedded contents are termed as non-necessary cookies. It is mandatory to procure user consent prior to running these cookies on your website.
ACCETTA E SALVA